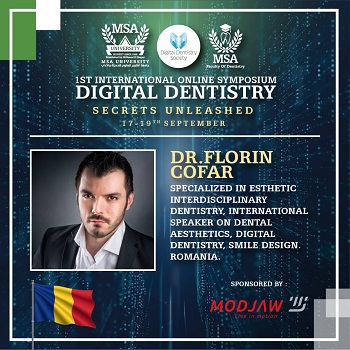 Dr. Florin Cofar is Specialized in esthetic interdisciplinary dentistry, International Speaker on Dental Aesthetics, Digital Dentistry, Smile Design. ROMANIA., Dr. Florin Cofar, attended University of Victor Babes, Timisoara, where he received his degree in dentistry in 2007. He is a post-graduate of NYU College of Dentistry, and a Harvard Business school attendee.

Specialized in esthetic interdisciplinary dentistry, working closely with other respected dentists in the field such as Christian Coachman, Eric van Dooren and Paulo Kano.

Opinion leader for some of the most respected companies in the field: Ivoclar, MIS, DSD, Planmeca.

Known for his videography work in dentistry, he is author of some of the most popular videos in the dental field.

In the present, is lecturing all around the world and practicing dentistry in his own practice in Timisoara, Romania.

Lecture: From data to execution. Clinical workflows in rehabilitations 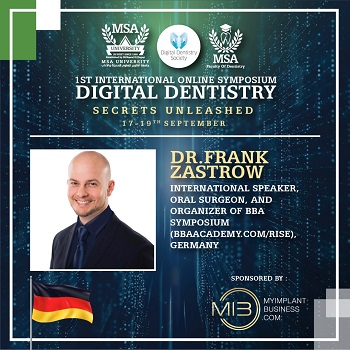 Dr. Frank Zastraw is an experienced oral surgeon and former senior physician at Professor Dr. Fouad Khoury, clinic Schloss Schellenstein in Olsberg, Germany. Now he leads his own private clinic in Wiesloch, Germany. His focus is the bone and soft tissue reconstruction in complex and compromised cases. For this topic he is also an international speaker and founder of the facebook group `Real Bone Builders` - a platform for Biological Bone Augmentation, which focusses on working with pure autogenous bone and tissues.

Lecture: Biological Bone Augmentation- What are the Basics, where are the Limits? 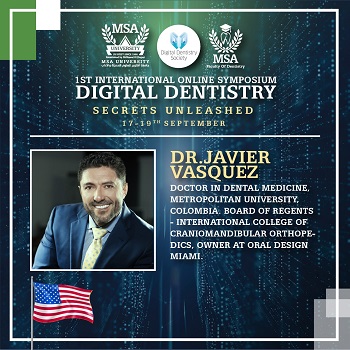 Dr. Javier Vasquez is a doctor in Dental Medicine, Metropolitan University, COLOMBIA. Board of Regents - International College of Craniomandibular Orthopedics, Owner at Oral Design Miami. Dr. Javier Vasquez, obtained his Doctor in Dental Medicine degree at the Metropolitan University in 1997. He has completed his post graduate training in the areas of prosthodontics , orthopedics, craniocervical dysfunction and TMJ.

He obtained a Fellowship in Fukuoka, Japan and a Mastership in the USA from ICCMO (International College of Craniomandibular Orthopedics). Biofunctional Dynamics Academy launched in Dijon, France, Barranquilla, Colombia and Miami, USA.

Dr. Javier Vasquez has been one of the early adopters in CAD CAM evolution for over 15 years and in the last 5 years has been a big developer into the integration and interdisciplinary treatment using 3D Data Integration.

For the past 3 years he united with Nemotec company in Madrid, a computer software integrated platform for interdisciplinary treatment planning.

He is a dentist, master ceramist , passionate education leader, clinical consultant and international speaker in the areas of occlusion, craniocervical dysfunction and high end esthetics.

He lives by his motto : “The limit is the sky! to dream, to learn, and to do! Live life!

Lecture: The implication of Craniofacial Growth into the Mandibular Dynamic Movements 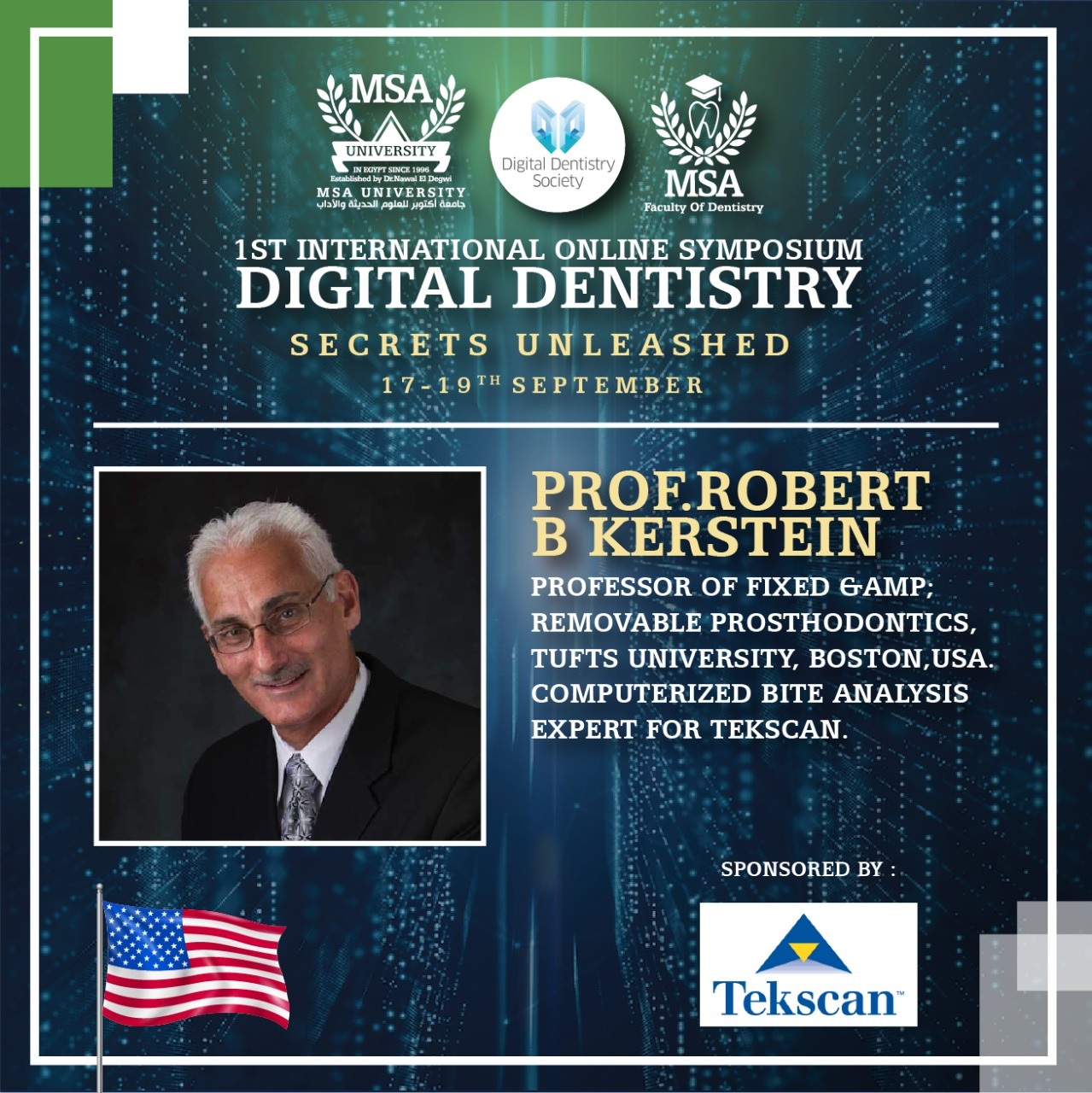 Dr. Robert Kerstein, received his D.M.D. degree in 1983, and his Prosthodontic certificate in 1985, both from Tufts University School of Dental Medicine. From 1985 – 1998, he maintained an active appointment at Tufts as a clinical professor teaching fixed and removable prosthodontics in the Department of Restorative Dentistry. In 1984, Dr. Robert Kerstein, began studying the original T Scan I technology, and has since that time, also studied the T-Scan II, the T-Scan III with Turbo Recording, and presently the T-Scan 8 technology.

Dr. Robert Kerstein, has conducted original research regarding the role that occlusion and lengthy disclusion time plays in the etiology of Chronic Occlusal-Muscle Dysfunction.

Recognized as a leading author and researcher in the field of Computerized Occlusal Analysis, Dr. Robert Kerstein, has published forty-five peer reviewed publications. Additionally, Dr. Robert Kerstein, has authored four textbook chapters that highlighted the T-Scan computerized occlusal analysis technology. Recently, he collaborated as Head Editor with 16 international authors to create the Handbook of Research on Computerized Occlusal Analysis Applications in Dental Medicine, which is a 20-chapter treatise on the T-Scan technology’s many uses in the differing disciplines of clinical dental practice. 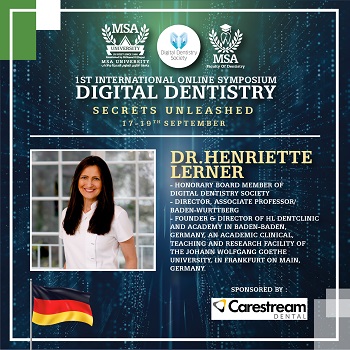 In 1990, Dr. Lerner was granted the degree of Doctor Medic. (DMD degree) from the Faculty of Dental Medicine, in Temeschburg, Romania, and then completed her postgraduate education in Oral Surgery, in Bucharest Romania. Later, Dr Lerner’ education in Implant Dentistry was completed in Germany and at Boston University. Dr. Lerner is the formerPresident of the Digital Dentistry Society International (DDS). Among her other certifications, she is Founding and Board Member

for the DGOI (the German Society of Oral Implantology,) and is an ICOI Diplomate.

Dr Lerner is also an Editorial Advisor for 2 scientific journals (Practical Implantology and DGOI Oral Implantology). She is the author of a number of scientific papers and book chapters (Esthetics in Dentistry; Implant Esthetics), which detail esthetics in Implantology, grafting procedures, biomaterials science and digital technologies.

Prof. Evgeny Mickhailovich Roshchin graduated from the Moscow State University of Medicine and Dentistry in 2004. Doctor prosthodontist, orthodontist dentist. In 2011 he was awarded the academic degree - PhD. Since 2010, he engaged in their own research. Author of 15 patents.

In 2013. Director Prosystom. The company is engaged in the development and manufacture of equipment for functional diagnostics, as well as the development of software allowing patients to carry out a comprehensive analysis on the previously obtained axiography data, computed tomography and electromyography. In 2016. this company has developed a new sensor that allows you to record the presence of bruxism patients during sleep.

Dr. Mahmoud Ezzat Ghazi, received his BDS degree from the Faculty of Dental Medicine at Ain Shams University in Cairo, Egypt in 2002.

He then attended a four year training program by the Royal College of Surgeons of Edinburgh and received their membership degree in General Dental Surgery (MGDS RCSEd) in 2008.

He then participated in the Membership in Restorative Dentistry (MRD) speciality training program supervised by the Royal College at Misr University, for his remarkable performance he was invited to become an instructor at this same program.

In 2011 he was appointed Deputy MRD course director at Future University in Egypt for their postgraduate speciality program.

He is the founder of the Diploma in Implant Dentistry training program in Egypt awarded by the Royal college of Surgeons of Edinburgh.

In 2013 he attained a Fellowship degree in Laser dentistry from the University of Genova Italy and has been lecturing on the subject ever since.

In August 2015 he co-lectured the DSD World Tour in Cairo, Egypt with DSD Founding Members Christian Coachman and Livio Yoshinaga and was elected DSD Lecturer.

In 2018 he was elected president of Digital Dentistry Society (Arab Union) responsible for all arab speaking countries in the region.

In 2019 he was elected as a board member of Digital Dentistry Society Key opinion leader & Lecturer for many international companies as: Bredent, Vita, Digital Smile Design, 3Shape & Tekscan

He now lectures internationally on all aspects of Digital Dentistry mostly in Europe & The Middle East & keeps a full time private practice in Cairo specializing in Digital Esthetic and Implant dentistry since 2004. 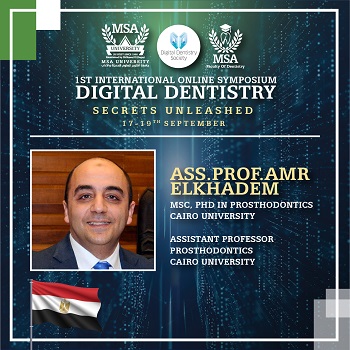 Lecture: Affordable digital dentistry: Are we there yet?

Dr. Amr Ekram is an EDS consultant of Oral & Maxillofacial Surgery in Egypt and a certified DHA Implantologist in Dubai, UAE. He graduated in the year 2000 then had his masters & PhD degrees from Cairo University, he is a former assistant professor at Cairo University.

He is currently the vice president of Digital Dentistry Society in the middle east sector (Arab Union). Director of the implant diploma program in the Egyptian Ministry of Health.

Dr. Amr is one of the pioneers in the in the field of digital dentistry in the Middle East. He participated as a speaker in many national and international conferences, most recent are the IDDA global conference, DDS global conference in Germany, EDSIC in Egypt & AEEDC in Dubai in the past couple of years.

His private practice includes many offices all over Egypt that provide CBCT imaging & digital solutions, mainly surgical guides, orthognathic wafers, custom implants & many more. In addition he is an instructor in many private courses & workshops in the digital dentistry subject & also an instructor in Digital Dental Craftsmen (DDC).

Lecture: The future of digital dentistry between reality and science fiction

Founder and CEO of the DSD-Digital Smile Design company.

Dr. Christian Coachman graduated in Dental Technology in 1995 and in Dentistry at the University of São Paulo/Brazil in 2002. He is a member of the Brazilian, European and American Academy of Esthetic Dentistry, becoming the only dentist member of the 3 most important academies in the world.

In 2004, Dr. Coachman was invited by Drs. Goldstein, Garber, and Salama, of Team Atlanta, to become Head Ceramist of their laboratory, a position he held for over 4 years.

Dr. Coachman worked with many leading dentists around the world as Dr Van Dooren ,Gurel, Fradeani , Bichacho , Ricci and Calamita .

He is the Director of the DSD Residency program with continuing education courses for dental professionals from all over the world.

In 2017 Dr Coachman became an adjunct professor of the Restorative Department at University of Pennsylvania School of Dental Medicine and, in 2018, coordinator fo the Digital Dentistry post grad program at the University Avantis in Balneario Camboriu.

Founder and CEO of the DSD-Digital Smile Design company.

Also works as a consultant for Dental companies and offices, developing products, implementing concepts and marketing strategies, as such as the Facially Driven Digital Orthodontic Workflow developed in collaboration with Invisalign, Align Technology.

He has lectured and published internationally in the fields of esthetic and digital dentistry, dental photography, oral rehabilitation, dental ceramics, implants and communication strategies and marketing in Dentistry.

Mr. Miladinov Milos, Wrote the book "Shoot like a PRO" and launched it in August 2015. The book sold 1700 copies in just one year, so that it became the best sold guide for dental photography

Mr. Miladinov Milos, Launched his own brand "Shoot like a PRO" in February 2016. 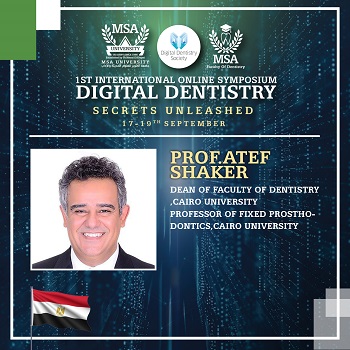 Prof. Atef Shaker's career in the academic dental field started in 1989 as a resident at Fixed Prosthodontics department, Cairo University. Since that time he enjoyed his specialty and decided to achieve more of the knowledge of this artistic science. Prof.Atef got his MD in 1995 and became an Assistant lecturer at the same department. Science and research never stops, that pushed him to get his PhD in Ceramics in 2001 to become a lecturer at Fixed Prosthodontics department.

He kept teaching, doing researches and lecturing since 2001 till present in Ceramics & CAD/CAM field.

Prof. Atef Shaker, got many certificates in his field, contributed in many local & international conferences, and shared in the supervision on tens of MD & PhD researches done at his dental school. As a Professor of Prosthodontics, Faculty of Oral & Dental Medicine, Cairo University, he’s one of the directors of the MD & PhD programs in Fixed Prosthodontics.

Prof. Atef Shaker, established and ran CAD/CAM department at Cairo University since 2014 . At 2016 he became the Councilor for Minister of High Education for Private Dental Universities. Now Prof.Atef Shaker is leading the Faculty of Dentistry, Cairo University as a Dean.

Inaddition Prof. Atef Shaker, is Member in the Egyptian dental Association ,the German Society of Oral Implantology and the International Society of Computerized Dentistry.